You’re on your smartphone. You have like a 4 inch touch pad/see through clear screen that lays across the top of your phone screen. You can prop it up or leave it down to text, play games and do what you want. 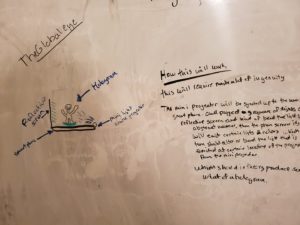 Then you click on an app called The Global Eye. A drop down setting pops up that says ‘live’ talks or prerecorded subject matters.

Another drop down window pops up on the screen with some categories of information you may be interested in based off your most recent google searches.

Then bamb a hologram of Jesus appears right before your very eyes on your smartphone with drop down sections ready to tell you about the bible and the word of god.

Yeah so when I was thinking of this idea.

I was thinking we could actually build an ENTIRE phone based off of this Holographic technology. What i mean is we would want to design the reflective small screen to bounce lights off it. Build the phone with hologram technology built into it at the bottom of the phone. Then work on the processing & light projections of the actual screen. This may have the potential to replace the Iphone someday if we figure it out.

How I thought we would be able to do this was potentially by creating a mini projector sort of mechanism for the smartphone. The size of like a USB port to be honest.  This project would essentially be turned on and project certain lights when they are on the Global Eye’s app on their smartphone okay.

How we would go about doing this by designing and building the lens into the bottom of the smartphone. I was thinking of this and it was pretty neat.

Then we would have a flip up see through touch screen that all people on the Global Eyes app will essentially need to prop up at the top of their phone to basically capture and reflect the light back at itself to create the hologram.

I was thinking of live performances using like a google headset where the headset essentially scans your face and projects it LIVE to all your audiences watching your performances on The Google Eye. I was also thinking of ways bands could use this project to increase their view count on live performances. I could see how beneficial these ideas may be to future presidents if they ever want to send a message to their followers.

Our AI technology will evolve as a nation. Our societies will be able to trust again. And best of all, this has the ability to pave the way to one of the best times to be alive in the History of the world!

“We bring the future to you”

Here’s a video on this idea for you guys Google and apple https://www.youtube.com/watch?v=Md3OPHJJh0w